As a visiting 4th year medical student with intention to become an Emergency Medicine physician, I have spent much of the past school year as a student learning in various Emergency Departments. During these rotations I have been taught the importance of gestalt and gut reaction, the importance of walking into a room and determining “sick” or “not sick”…and quickly.  This is most important in the case of young babies who cannot tell you what is hurting or why they feel bad. My experience at TTL has stressed the importance of this, especially here in Mokhotlong and surrounding villages where there are both communication challenges and limited medical resources.

The severity of illness and malnutrition seen here in combination with the limited medical resources has made for a particularly frightening scenario for a medical student from the U.S. who is currently oriented to the “better safe than sorry” mentality of teaching hospital physicians at home. Thorough work-ups, complete labs and empiric treatments become the standard, but here I’ve found it’s just not that easy, in fact it’s not really even an option.  Here the challenge becomes determining when the benefits of the safe-home will outweigh the risks of taking a child away from his family and community. When does a child require a visit to the Mokhotlong hospital versus staying home to be seen at their local clinic? When are they big enough? When are they too small? When is their heart rate or breathing rate too high? Then once the decision is made comes yet another challenge…now what can be done to help?

One of my favorite experiences while being here at TTL has been the opportunity to see the kids here at the safe-home beginning to thrive with consistent nourishment and the loving attention of the Bo’Me.  Initially I saw this and worried about how the children were able to adjust once returning home to the challenges of life without these consistencies. Thankfully, on one of our outreach treks we had the chance to check in on a 3 year old former safe home resident. He was quite possibly the happiest, healthiest-looking little guy we saw during the entire month out there. He was at home with his father who cared for him and was doing exceptionally well.  They both seemed so grateful for TTL; I loved the opportunity to see the hard work of the Bo’Me and all the staff at TTL really paying off. It’s also great to know that the wonderful kiddos we’ve had the chance to get to know here at the safe home can go home and continue to thrive and be happy like that little boy we saw. 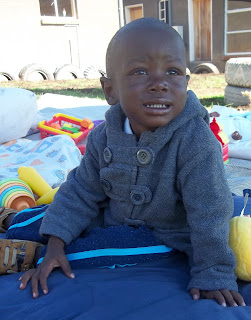 Lastly, I would like to share a few of the small things the kids have taught me this month. 1.) When you hear music, just drop everything and dance it out. It doesn’t really matter if you were busy reading a nice book, throwing a ball or playing with a puppet or something…dancing is more important. 2.) If something upsets you, take 10 seconds to yourself, put your face on the floor and let out the frustration. Then just move on and go about your business. 3.) Crawling is a process that starts with keeping your head up and smiling a lot, and one day we will all get there, even Tsepang. 4.) Kids are learning even when it looks like they are paying no attention at all. Our attempt to teach some of the older kids the body parts necessary for the classic “head, shoulders, knees and toes” ditty took mere weeks. Success was finally achieved, however, about nothing is more rewarding than one of the little ones proudly marching up to you in the morning and pointing to the center of their face and asking, “nose?” Yes Tlatso, indeed it is! 5.) No matter what, smiling is always an option.

******
Kelly Hughes is a 4th Year Medical Student at the University of Indiana - Purdue.  TTL appreciates all her great work and will continue to reread and reread the last paragraph of her post for solid advice.
Posted by Brad Wilkin No comments:

A Drop in the Ocean

A Drop in the Ocean

As a medical student volunteering with TTL for the month of February, I met one of our recent new arrivals on my first morning at the safehome.  While playing with the children outside, one of the bo’me approached me and placed Thuso on my lap while she tended to another child.  I was immediately alarmed at how limp he was as he lay in my arms.  His body was thin and wasted and he had absolutely no muscle tone as he gazed listlessly into space.  Upon asking the bo’me his age, I was alarmed to learn that this child was already over a year old.  His growth was so stunted by malnutrition that he appeared several months younger and only weighed 5.5 kg (12 pounds).  Although my medical training in the U.S. had never exposed me to anything near this severity of malnutrition, Thuso’s stick-thin limbs, protruding abdomen, swollen feet and thin, discolored hair would quickly become familiar signs to me as I encountered more children suffering from malnutrition as they were brought to the safehome and during outreach trips. 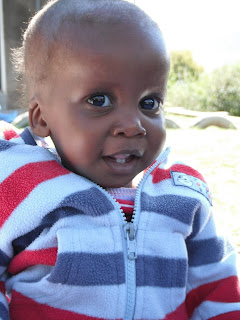 Thuso’s mother had reportedly abandoned the family at 3 months of age, and he was being cared for by his grandmother before the TTL outreach team brought him to the safehome due to signs of severe malnutrition along with a fever and cough.  He spent a week in the hospital receiving antibiotics for pneumonia along with nutritional supplementation before returning to the safehome.  Thuso’s fever and cough have since improved and although it may take several months for him to recover to a healthy weight, he is already looking much better.  The boy who was too lethargic to even hold up his head when I first met him is now sitting up on his own, laughing, and interacting with the other children.

While working at the hospital, I have come to realize that many basic medications and diagnostic tests are simply not available here.   It is incredibly frustrating to know that there are patients dying every day because of a lack of what are in many parts of the world considered to be routine treatments.  Likewise, seeing children like Thuso who are dying of malnourishment produces a reaction of disbelief and outrage to those of us who are not accustomed to witnessing the effects of such a severe lack of resources.  While it is common knowledge that such problems are present throughout much of the world, it is difficult to appreciate the magnitude of the crisis until seeing it firsthand.

The number of children in Lesotho impacted by malnutrition can initially seem overwhelming, but TTL’s motto of “one child at a time” reminds us that although we have a long way to go in combating HIV and malnourishment in the children of Lesotho, every child that TTL supports is worth the effort.  In the words of Mother Teresa, “We ourselves feel that what we are doing is just a drop in the ocean.   But the ocean would be less because of that missing drop.”  I continue to be impressed by the bo’me at the safehome who provide such loving care to the children of the safehome, and I know that they will continue to focus the same amount of effort and attention on each new child that arrives.  As TTL continues to expand, more and more children like Thuso who might not survive without assistance will be given the chance to flourish through the efforts of our outreach and safehome workers.

++++++
Teresa Backes is a 4th year medical student at the University of Missouri.  She spent the month of February volunteering at TTL and the Mokhotlong hospital.  TTL appreciates all her suggestions and love shown towards the children.
Posted by Brad Wilkin No comments: