A Wish for World AIDS Day

HIV/AIDS has been a part of public consciousness for about as long as I’ve been on the planet. Because of this, I was a small child during much of the first decade of chaos and confusion; I was mainly unaware of the mounting deaths and lack of solutions.

Instead, my reality of HIV/AIDS has been yes, one of death and devastation, but also one of progress and promise. I have seen the developments of a greater scientific understanding of the virus, continued progress towards more comprehensive and effective testing and treatment, and hints at the real possibility of an AIDS free generation.

In Lesotho, no one is unaffected by HIV/AIDS. With a 1 in 4 infection rate, it is unfortunately a country partially defined by this epidemic.

During my time in Lesotho I’ve been excited to see all the advancements towards fighting HIV/AIDS. Antiretroviral therapy(ARVs) for adults and children are available at even the most isolated rural clinics. Mother-Baby packs are provided to all pregnant women as part of a comprehensive program to fight against vertical transmission. Basotho communities express an improved understanding and acceptance of HIV/AIDS, acknowledging that it need not be a death sentence.

And at the same time I have been continually frustrated and saddened that red tape, a lack of resources, and waning political commitment mean that solutions we know to be successful at fighting HIV/AIDS are not being implemented effectively in Lesotho, and particularly Mokhotlong.

Clinics run out of ARVs meaning a grandmother may waste four hours walking to and from a clinic, failing to get what she has been taught are critical medications for her child.

HIV+ women still give birth at home because of a lack of other options, despite the known dangers this presents for both mother and baby.

Blood samples to test a child for HIV or assess the stage of the virus in their small bodies – two critical steps in getting started on treatment – are lost or results never make it back to the clinic, causing unnecessary, life threatening delays.

In the news coverage leading up to World AIDS Day, the hope and deflation expressed in this article feels like a perfect reflection of what it’s like working in the field of HIV/AIDS in a resource poor setting. Despite all we know about the virus and everything we can do to prevent its disastrous effects, if it’s not making an impact in the locations where the epidemic is at its worst, it’s simply not enough.

This week TTL lost one of the children being cared for in the safe-home. After three days admitted at hospital for distressed breathing, this little girl passed away. She had been identified as HIV+ in October but confirmatory results from a second test had still not come back so she was not on treatment. It is suspected she contracted a form of pneumonia that targets children with low CD4 counts (a sign of a greatly weakened immune system and the need to start ARVs). Suspected because the hospital does not have the human resources or equipment to say for certain. Despite severe malnourishment and repeated prescriptions for antibiotics it took two visits in one day to convince the hospital they needed to admit her.  Unfortunately, adequate medical attention came too late for her small, weakened body.

In my mind, this little girl’s death – like so many children’s deaths in Lesotho – was not due to negligence but a lack of resources. There are simply not enough trained medical staff, equipment, and treatment options to handle the burden an epidemic like HIV/AIDS places on a health system.

My wish for last year’s World AIDS Day was for an HIV+ child that TTL supports to continue to grow and thrive. I'm happy to say that one year later, she is doing exactly that.

My wish for this year is a bit bigger and of the same importance. It's a wish for true global commitment to produce real results that will end this epidemic. Commitment that reaches up from the grassroots where it is so strong to the highest political offices, ensuring that an AIDS free generation is possible both in rhetoric and on the ground where it counts the most.

Bacteria, viruses, fungi, parasites…GERMS!  They abound everywhere.
We’ve all had those days of red, running noses, fevers, running
tummies and a general feeling of wanting to sleep the hours away
rather than chance moving even our little finger.  Many of us don’t
give germs too much thought.  They come.  They go.  We move on when
they do.
For the infants and children at TTL, germs can pose a very large risk.
What might result in a day of rest for you and me can result in a
life and death struggle for the little bodies already weakened by
malnutrition and other co-morbid conditions.  In an effort to mitigate
this daily challenge of keeping little lives healthy, TTL is embarking
on designing and implementing a comprehensive infection control
policy.  We are looking at our current practices and determining what
actions promote health, what actions inhibit health and how we can
improve our practices.  We know change takes a lot of time and effort, but smiles on healthy
faces makes all the work worthwhile!

Jennifer Baker, a former Swaziland Peace Corps Volunteer and professional Nurse from the US, is working with TTL over the next month to support us in ensuring TTL is providing the best possible care to the vulnerable children we support. 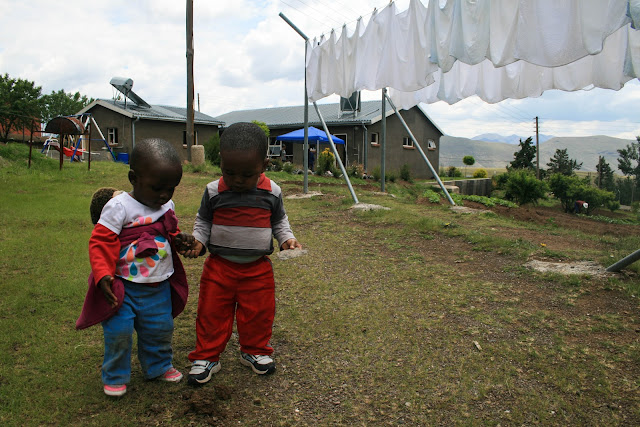 The Faces of Malnutrition 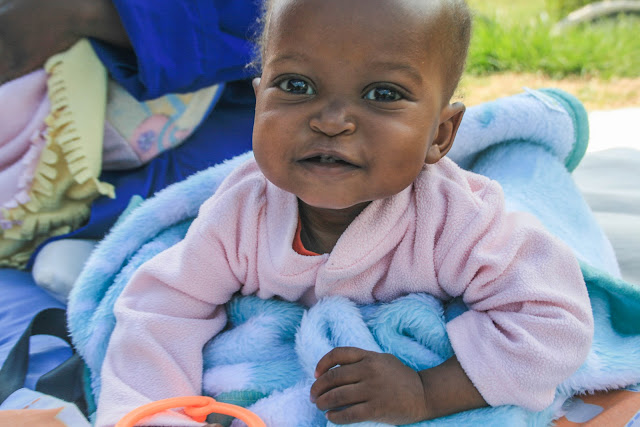 This sweet baby girl has a little smirk that instantly puts a smile on the face of anyone she flashes it at.


Boitathelo came to TTL a few weeks ago suffering from chronic malnutrition.
Malnutrition is generally classified as either chronic or acute...depending on whether the child has experienced a severe lack of food and essential nutrients over a long period of time, perhaps their whole life, or they are suffering from a temporary lack of food and nutrition.
Children suffering from acute malnutrition generally experience what is referred to as "wasting"... or a substantial loss in weight, among other symptoms.
Chronic malnutrition generally leads to "stunting"...  or an overall lack of growth which results in a child who is very small for their age, as well as significantly underweight.
Sweet Boitathelo is fourteen months old...chronic malnutrition has clearly taken its toll.
I know it's hard to tell from the picture above, but she is hardly the size of a nine month old.
She hasn't started walking or even crawling and can only just sit up on her own.
Although she's been with us a few weeks, this little one has been slow to gain any weight.
Yesterday, her breathing became extremely distressed...her little stomach rapidly rose and fell with each little breath.
She was admitted to the hospital where we hope she'll receive the care she needs to overcome the many obstacles she faces.
Through it all, however, that little smirk keeps popping up to let us know there's a lot of fight left in this little one. 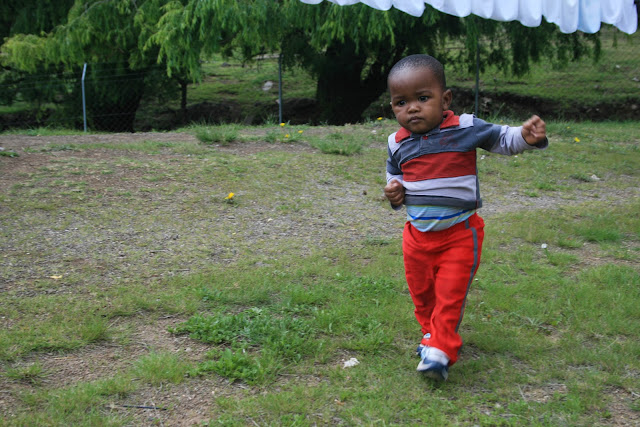 Renang, in comparison, was suffering from a more acute case of malnutrition when he arrived at the safe-home several months ago.

Although very skinny, his overall growth had not suffered...he was within the normal height range for his age.

Renang's malnutrition had still taken its toll, however.

At seventeen months he wasn't yet walking...likely because his legs hadn't developed enough muscle-mass to master this skill.

In just a few weeks and many big meals later, this little man was cruising around the playroom.

Renang returned home to his grandmother last week, his chubby cheeks and confident gait a sure sign of his recovery.

TTL will now serve Renang as an outreach client to continue to monitor his growth and health and ensure that those little legs keep running around.
Posted by Julie 1 comment:

Greetings from the New Fellow!

Hello!  My name is Brad Wilkin and I am the newest fellow here at Touching Tiny Lives.  I am so excited to be here in the beautiful country of Lesotho surrounded by both beautiful scenery and friendly people.

Many years ago I visited South Africa and Kenya where I volunteered with several different HIV/AIDS related organizations.  During that time, I fell in love with the cultures and was encouraged by the opportunities to learn and simultaneously offer a helping hand.   Needless to say, I’m excited to be back and I am ready for adventure! 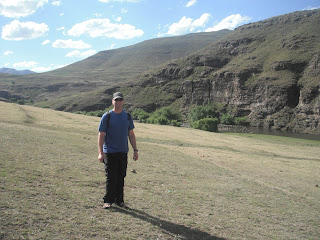 Having spent the last couple of years in Denver, Colorado, I was elated to find out that Mokhotlong is surrounded by beautiful peaks.  I have already been impressed with the marvelous vistas during hikes and an outreach journey to a local village.

I know my fellowship over the course of the next year will be full of grand experiences, awkward moments, and new friendships.  I look forward to sharing some of my experiences with you.