Being away from home over the holidays is always strange and that, coupled with my first December summer, made the approaching Christmas season feel a bit surreal. However, we started off our holiday weekend with the staff Christmas party on Thursday and all of the singing, dancing, gift-giving, and feasting infused me with ample Christmas cheer. Add a Christmas Eve bonfire, some holiday baking, and a wonderful Christmas meal at the Lephoto’s and it turned out to be a great holiday.

It is interesting to celebrate a major holiday in another country, and impossible to refrain from noting the similarities and differences to the customs and celebrations I am familiar with in the U.S. I’ll share with you some of my observations:

- Since Electricity is still somewhat of a novelty in Mokhotlong, you do not find the streets lined with lit trees or colorful electric displays of Santa and reindeer in people’s front yards. In fact, the lead up to the holiday seems almost nonexistent (from my isolated foreigner's perspective, anyway). Though opulent Christmas displays do usually get one in the Christmas spirit, I think America might place more importance on all that Christmas hype than the day itself so in some ways it is refreshing to experience a refined holiday - Christmas just as Christmas.

<-- In the United States 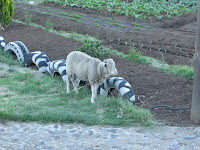 - Basotho and Americans alike tend to leave Christmas shopping until the last minute. Rachel and I went to Pep (a store in Mokhotlong that sells… everything?) an hour before it closed on Christmas Eve to buy marshmallows for the aforementioned bonfire and had to stand in line for nearly a half an hour to get to the register! It was kind of a madhouse in there.

- Families in Lesotho love Christmas celebrations like the rest of us, and they splurge on Christmas also. They don’t have credit cards to max out at the mall though. Instead, they "dip into their savings" by using most of their food rations, namely maize meal, for Christmas celebrations. I have been told that this celebration makes January a particularly hungry month for many families here. TTL, thanks to generous donations made by local organizations, is giving families more food than is in their usual monthly package this December in hopes that giving food to use for Christmas celebrations will limit food shortages in January.

Like so much of my experience at TTL, the holiday reminded me yet again how fortunate we are in North America to have so much - so much family, so much food, so much of everything really.
Merry Christmas to all of our TTL supporters! Thank you for your generosity and attention to our cause. We are so blessed to have such a strong network of support. We wish you the happiest of holidays. 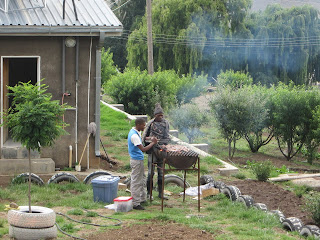 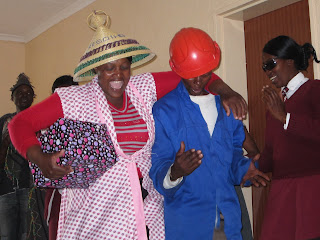 Gift exchange at the Christmas party - involved a lot of singing and dancing.
Posted by Meghan 3 comments:

People who are just learning about TTL frequently ask about our role in the lives of children after they leave the safehome. All of our safehome babies become outreach clients when they are reunified with their families, meaning that TTL still supports them with monthly food packages and monitors them to make sure they are continuing to make strides in their growth and development. When we are confident that these children have the care and resources to continue progressing without TTL's assistance, they are "graduated" from these services. However, even when they no longer require our check-ups and nutritional support, TTL does its best to ensure that the health needs of these children are met.
To illustrate TTL's efforts to be an ongoing source of support to the children we reach, below are Leboneng and Nako. 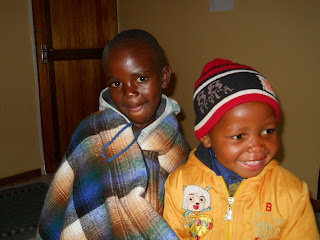 Leboneng, now 6 years old, was in the safehome from 2006-2007. Nako, 3, stayed with us in 2009 and 2010. These boys are no longer part of our outreach program, but they stop by TTL once a month to get the taxi fair TTL gives them to come to Mokhotlong Hospital to pick up their ARVs. The boys live in the same area and arrive together with their caregivers, who cannot afford the cost of transportation. How much money does TTL spend on making sure Leboneng and Nako get these important drugs every month? Just over $2. The adage "a little goes a long way" comes to mind.
Although the availability of ARVs in Lesotho has vastly improved in the past couple of years, access to the clinics and hospitals that provide them can still be a challenge to those living in rural villages. I can't say for certain what would happen if TTL did not provide this assistance to Leboneng and Nako, but it is a real possibility that they would not get their ARVs, depriving them of the chance to live healthy lives in spite of HIV.
Posted by Meghan 4 comments:

Today, Karabo was reunited with her mother and grandmother after a 3 month stay in the safehome. Referred to TTL by a rural health clinic, at 1 and ½ she weighed only 8 kg and was unable to stand without support. In her letter to TTL, the nurse reported that “the child was weaned too early having been advised to do so by a traditional doctor. Now the child is malnourished since the mother cannot sustain supplementary feeds.” During her time in the safehome, Karabo has made great progress with gaining weight (now at a healthy 9.15 kg), starting to say words and taking her first hesitant steps by herself. No doubt she will be running around all by herself soon enough and we're happy that she was healthy enough to return to her family in time for Christmas. 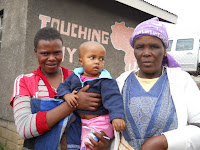 Last week, Khathatso arrived at the safehome after being referred through our Village Health Worker Network. He had recently been admitted to hospital for kwashiorkor, a form of acute malnutrition due to a lack of protein. Khathatso's mother passed away over a year ago due to TB and his aunt had taken on the role as caregiver. With 4 other children in the house under the age of 5 and no stable source of income, TTL was concerned that Khathatso's aunt might be stretched too thin to provide him with all the support he needs to recover and get his development back on track. At almost three years old, Khathatso has adapted to the safehome the fastest out of any of the children I have seen here so far. Most children, particularly the older ones, take a few days to adjust to the safehome sticking close to the Bo’me and avoiding the other kids. Khathatso on the other hand was laughing and playing by the end of day 1.

With three kids leaving the safehome and meetings and errands in Maseru, last week was busy. Friday capped it all of with three groups of visitors coming to TTL!
First, our partners at Sentebale arrived with their supporter Ein Herz Fur Kinder in a helicopter on TTL's front door step. It was an opportunity for Ein Herz Fur Kinder and Sentebale's UK staff to learn more about TTL and the types of challenges faced by OVCs in the mountains of Lesotho. 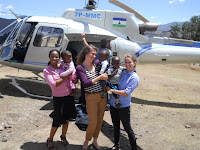 This was followed in the afternoon with a meeting with TTL's Board so that the TTL could staff meet the new members and provide them with a brief orientation. It was great to hear how committed everyone is to supporting vulnerable children in Mokhotlong and we're looking forward to working together in the new year.
And then at the end of the day, TTL received a visit from the local branch of Standard Lesotho Bank. They have generously donated maize meal that TTL will be able to distribute to our clients to improve families' food stability while they are waiting for the crops to come in. With the continuing drought this year, the crops are already very far behind and so this food is badly needed by families in the region.
Thank you to Standard Lesotho Bank for their generous donation!! 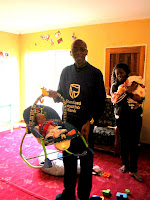 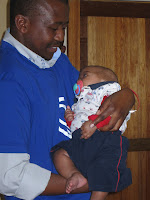 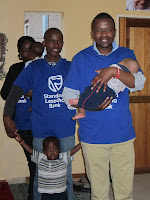 1 in 4 people in Lesotho are infected with HIV/AIDS. This is the third highest rate of HIV/AIDS infection in the world and the consequences of this epidemic are apparent across the entirety of this small nation.

1 in 4 children in Lesotho are orphaned. This means that over 130,000 children – and roughly 9% of the total population of Lesotho – is missing one or both parents.

These statistics cannot be seen as unrelated. It is estimated that 65% of Basotho children have been orphaned because of AIDS and no family, or child, in Lesotho is immune from the devastating impacts HIV/AIDS has had –and continues to have -on this small mountain kingdom.

Today, December 1, is World Aids Day. TTL has been able to commemorate this day in the best way possible: a graduation from the safehome.

Lerato and I arrived at TTL at about the same time and her story has always stuck in my mind as the exact reason TTL is needed in the area. Here’s her story:

Lerato arrived at the safehome in mid-August. She was malnourished, showed poor developmental growth, and had tested positive for HIV just weeks before. Her mother had passed away from HIV related causes and she was being cared for by her aunt who suffers from the after-effects of a stroke. Immediately after arriving at the safehome Lerato started to show signs of improvement. She was started on ARVs and went from being very lethargic and barely able to walk to walking, dancing and even running around the playroom. She also loved to have her picture taken and would put on a very serious face until a second after the flash when she would dissolve into a fit of giggles.

However, while Lerato’s nutrition and health has greatly improved, she is still developmentally delayed. She celebrated her 4th birthday in October but her behaviour has often been hard to distinguish from children in the safehome who are 1-2 years younger. The safehome caregivers have worked hard with her, encouraging her to say words and feed herself, but it’s difficult to assess how much of an impact her HIV status – and long bouts of malnourishment and illness – has had on her development. But Lerato has also always seemed to be very influenced by the other children around her. During her stay at the safehome, when there were older children who were walking and feeding themselves, she was often more motivated to do these things as well.

When we took Lerato home to her aunt today, her brother and cousin were there to greet her. There were also about a dozen other children who had gathered to see what was happening. Hopefully with the influence of older siblings and playmates around, Lerato will continue to make improvements in her development – wanting to talk, and feed herself, and do all the other things the older children (and sometimes children of the same age) are doing. Combined with the nutritional and medical support that the Outreach team will continue to provide, hopefully for once the odds will be stacked in Lerato’s favour.

My one wish for this World Aids Day is that next year at this time, when Lerato will have turned 5 and the school year about to start again in January, she will be healthy, successfully taking her ARVs, and ready to start primary school with all the other children. 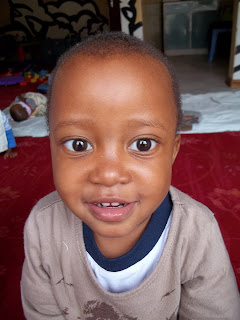 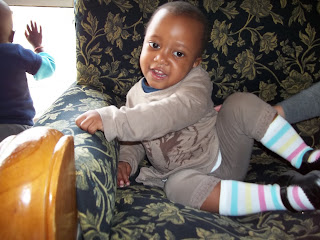 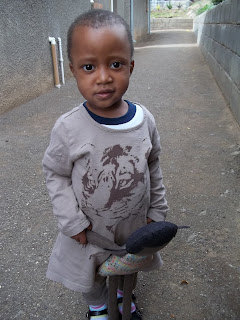