Yesterday I spent most of the day travelling to and from Thaba-Tseka with Nthabaleng and one of TTL's board members. The purpose of the trip was to meet with the District Administrator in Thaba-Tseka as part of TTL’s ongoing efforts to purchase a piece of land where a new Thaba-Tseka outreach office can be built. TTL began working in Thaba-Tseka in 2007 after we started receiving referrals from some of the clinics in the area that borders the Mokhotlong district. Since then, Outreach has been working actively across the Mashai district in Thaba-Tseka and TTL has been hoping to expand across the entire region. To do this, TTL needs to build a new outreach office in Thaba Tseka.

So off we went to Thaba Tseka to plead our case and see what could be done. After a quick 20 minute meeting, we were on the road again heading back to Mokhotlong. The three of us laughed at the fact that we would drive for over 6 hours today­ -all for a 20 minute meeting- but we all knew there really was no other way. Infrastructure in Lesotho, particularly in the highlands, remains poor. The government office in Thaba Tseka does not have email/internet, and based on the long line-up at the DA’s door, I don’t think he is spending a lot of time on the phone. Besides face-to-face is almost always more persuasive. All-in-all the meeting was positive, but no concrete results yet.

As we drove home bumping along the dirt road, the sky slowly darkened and I found myself watching the clock. My mind wandered between my grumbling stomach and what I could possible eat for dinner tonight; debating whether there would be enough time this evening to put a few hours into the funding proposal I’ve been working on; and most importantly, when would we finally hit the paved road – the first sign that we were almost back at the town of Mokhotlong.

Just before 7pm, my mind was brought back to attention by the ring of Nthabeleng’s phone. Assuming it was her family calling to find out when she would be home, I was not expecting what would come next. A few quick sentences later, Nthabeleng hung up and turned to me to say that Reitumetse had died. I found my mind racing, wanting to ask why, what could have possibly happened since we had left that morning. But the truth was I knew there was no real answer and there was really nothing else left to be done. The reality of the situation was that Reitumetse was born premature, exposed to HIV, and had not been receiving adequate nutrition for the first two months of her life. She had simply come to TTL too late. Preemies face a lot of challenges regardless of where they are born and rural Lesotho is not the most forgiving environment. And so beside some sighs and ‘ach’s we continued to drive in silence, bumping along the dirt path on the way back home.

Since then I’ve been thinking a lot about what Nthabeleng said during the meeting in Thaba-Tseka: none of us can say the children in Thaba-Tseka don’t require, and deserve, the same type of critical support TTL provides children in Mokhotlong. However, it is logistically impossible for TTL to serve all of Thaba-Tseka and establish itself within the region without have a base there.

Reitumetse was one of our clients from Thaba-Tseka. I can’t help but think that if she had been born to a mother in Mokhotlong, there is a chance TTL may have reached her earlier. Maybe we would have been put in touch with her mother when she was pregnant and we could have minimised Reitumetse’s exposure to HIV. Maybe Reitumetse would have been referred immediately after being born premature and TTL could have provided nutritional support to the family, rather than the water and sugar solution that she lived off of for the first two months of her life. The truth is, I know the same scenarios can and do occur in Mokhotlong. Even if Reitumetse had been a TTL client earlier, her fate may have been the same - sometimes nothing else can be done.

But despite all the ifs and maybes, I can only hope that things start to come together so TTL can build a centre in Thaba-Tseka. By expanding its reach and establishing TTL’s presence in the district it would make a difference. Reitumetse’s life was far too short and I can’t help but feel that she deserved a better chance. There are so many vulnerable children in Lesotho who deserve a better chance at healthy and happy futures -and at least I know that TTL does make some of those chances possible. 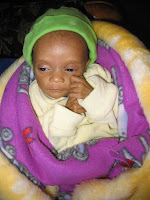 Born premature to an HIV + mother, Reitumetse arrived at TTL’s safehome on August 29, 2011 at almost two months old. Her mother has passed away due to HIV-related causes and her father’s whereabouts are unknown. On September 14, Reitumetse started to develop difficulties breathing and was admitted to hospital where she passed away that evening.