On Monday, the two TTLF fellows – myself and Meghan – and two members of the TTL Outreach Team – Kokonyana and Nthabeleng Lehela – went off to see a set of baby twins that TTL had heard about through our Village Health Worker Network. Both babies were underweight and the mother had been struggling with breastfeeding and so we were off to see how TTL might be able to assist the family. I knew that the twins lived far away but it was Monday and I had been distracted in the morning answering emails so when Kokonyana came to tell me it was time to go at 8:30am, I quickly ran to the kitchen to grab an apple and hopped in the truck. I had no idea that we wouldn’t be returning to TTL until 7pm. Although, I’m not sure anyone in the truck realised it was going to be such a long day.

We left Mokhotlong and drove further and further out into the mountains –and as per usual, the further we went, the worst the road got. About three hours into the drive, we started to periodically stop along the way asking whatever Mosotho we could find if we were still on the right track. Each time there was a quick exchange in Sesotho and a hand that gestured off to the mountains in the distance – we had to just keep going. Across a river and over a few more precarious mountain sides, we arrived in another small village and what looked like the end of the road. The Outreach Staff asked a man sitting outside his rondavel about the family we were searching for and again there was a hand pointing off to the mountains in the distance. We weren’t there just yet but this was as far as the truck would be going – we would be walking the rest of the way. Along with directions, the villager also gave us some bad news: one of the babies had passed away earlier in the week.

So off we went by foot, even more uncertain about what we would find at the end of the road. Twenty minutes later, we arrived at a set of four rondavels on the side of the mountain but after a few calls of ‘Ko Ko’ it didn’t seem like anyone was home. Eventually, we spotted a woman off in the fields and called her over – it turns out she was the sister in-law of the mother of the twins. She confirmed that one of the babies had died and the mother had taken the other baby to the local traditional healer. She suggested that we speak to her mother in-law and brought us over to the fourth rondavel where we found three more family members. The grandmother was thrilled at the sight of Meghan and I, exclaiming that we were the first white people to be in her home. I honestly wasn’t surprised, her home felt like it was in the middle of nowhere. After the Outreach Workers explained to the family about TTL we were off with the sister-in law as our guide to find the mother of the twins.

By the time we were meeting with the village chief it was already after 3pm. After a long conversation with him, and another discussion with the father, it was agreed the baby would come with us to the safehome. I think what really helped convince the father was his sister-in law. Before her marriage she had lived in a different village, one where TTL had been, and she explained to him that she knew of babies that we had helped and the difference TTL could make.

As we headed back across the fields and mountainsides towards the TTL truck, this time mother and baby in tow, I was relieved that the baby would be coming back to the safehome with us – particularly because this village seemed so far away from any type of help. Driving the long 4 hour trip back to TTL, I held on tightly to this tiny baby who was supposed to be 3 months old, but looked much much younger, trying to protect her as much as possible from the bumps on the road. As I thought about the day everything was a mix of emotions. I was hungry and tired, happy and hopeful that we would be able to help this little girl, sad and frustrated that TTL hadn’t been able to get there sooner to help her twin, and comforted by the fact that the sister-in law stepped in on TTL’s behalf and knew who we were. It is a sign that TTL is truly building a legacy for itself across the region, and the more people who know of TTL means the more vulnerable babies TTL will be able to help. 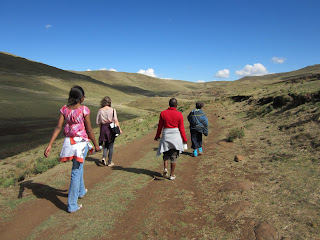 Loved the post! Keen observation about TTL's legacy, too. So important.