More and more of the babies in the safe-home are getting close to their time of departure and this week we saw two children get re-united with their families. 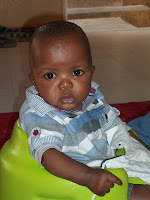 Letlotlo arrived at the safe-home in mid-September aged 4 months. Before coming to the safe-home, Letlotlo was being cared for by his 15 year old sister because his mother was critically ill with HIV-related TB. Because of his mother’s illness, Letlotlo had been mainly living off of sugar water and arrived at the safe-home weighing only 3.1kg. He is now a healthy 7kg and has finally begun to hit some of his critical development milestones like sitting on his own and standing with support. Today, Outreach reunited him with his father as a healthier and stronger 9 month old. 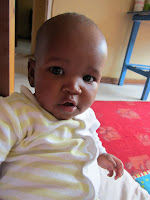 Another departure this week was sweet, smiley Lineo. Lineo arrived at the safe-home shortly after her mother passed away from HIV-related causes. Fortunately, Lineo’s first DNA PCR test has come back negative for HIV and she has been growing and developing well during her 4 months in the safe-home. Lineo has gone home to live with a female relative from her extended family. This M’e’ also just happens to be one of TTL’s safe-home caregivers leaving us all confident that Lineo will continue to thrive in her new home.

With two babies leaving there has also been two new arrivals direct from the Mokhotlong hospital. Both little girls were picked up by the Outreach team late last week thanks to Village Health Workers who identified these babies as being critical cases. The similarities between the two girls are striking – both are 11 months, exposed to HIV, critically malnourished, and come from the same region of Mokhotlong. In addition, one girl has been suffering from a cough for over a year and we are waiting on the results of her TB test.

With so many babies in the safe-home looking healthier and more active, let’s hope some of their positive energy rubs off on Tlotlisang and Tlholohelo. 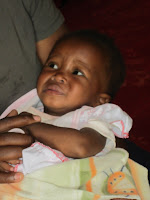 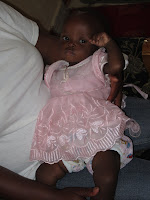 My greetings from France! After visiting your blog, I could not leave without putting a comment.
I congratulate you on your blog!
Maybe I would have the opportunity to welcome you on mine too!
My blog is in french, but on the right is the Google translator!
good day
cordially
Chris
http://sweetmelody87.blogspot.com/